Here comes Santa Claus, right down… well, a main street near you! With more than a dozen Santa Claus parades happening in the GTA this year, Jolly Old Saint Nick and his reindeer will be pretty busy from mid-November through Christmas Day.

Here are all the Santa Claus parades this year in Toronto and the Greater Toronto Area regions of Durham, Halton, Peel, and York. All parades happen rain or shine (or snow), so dress accordingly and bring a warm beverage.

Toronto’s Santa Claus Parade was first held in 1913, making it more than 100 years old! It’s still North America’s largest children’s parade, and while you won’t see Santa pulled by live reindeer like he was back in 1913, you will see floats, marching bands, and Santa in his (motorized) sleigh during the 2.5-hour extravaganza. This parade is beyond popular—arriving several hours early is not unusual. Can’t make it? Watch the Santa Claus Parade on CTV the same day at 4:30 pm.

Parade route from Christie Pits Park east along Bloor Street West, then south along University Avenue to Wellington Street West, before making its way to Yonge Street, and ending at the St. Lawrence Market.

The 29th annual Santa Parade in Lakeshore Village, Etobicoke, is a community-run parade with 15 floats (including a self-propelled train) and hundreds of coordinating costumed participants each year. It is one of the province’s largest Christmas parades, with more than 50,000 spectators in recent years. After the parade, stick around for Skate with Santa from 12 pm to 4 pm, where you can meet and take pictures with Santa and skate with his elves on the Colonel Samuel Smith Skating Trail.

Route is along Lakeshore Boulevard West, from 1st Street to 35th Street.

Begins at 2 pm. Route is along Weston Road, from Church Street south to Sidney Belsey Crescent.

The 13th annual community parade in the Upper Beach neighbourhood is officially Hamper’s Santa Claus Parade, named for Community Centre 55’s mascot, Hamper the reindeer. Expect marching bands, floats, and costumed characters. Letters to Santa will be collected for delivery. After the parade there will be a barbecue, kids’ crafts, and photos with Santa at Community Centre 55.

Route is along Kingston Road, from Victoria Park Avenue to Walter Street.

At the 3rd annual Santa Claus parade in north Etobicoke, join Santa and his friends for an event with decorated floats, community organizations, fire trucks, costumed kids’ characters, and Santa on his sleigh.

Route is along Albion Road, between Islington Avenue and Kipling Avenue.

This annual nighttime Santa parade in Brock Township showcases illuminated floats and costumed groups. This year’s theme is Christmas Lights. After the parade, visit with Santa and enjoy hot chocolate at the fire hall at 360 Bay Street.

Route is from the Beaverton Curling Club (164 Main Street) along Main Street to Simcoe to Osborne and around to Bay Street.

Route is along King Street West from Scugog Street to Simpson Avenue near the Bowmanville Mall.

Route is east along Brock Street from Centre Road to Uxbridge Secondary School.

This nighttime parade features bands, floats, and Santa Claus and his sleigh, led by Rudolph.

An evening parade that kicks off with a fireworks display and continues with 70 entries in the parade, including marching bands, illuminated floats, and clowns. This year’s theme is Starry Night.

For 51 years, floats, performance groups, and costumed participants have been parading down Glenanna Road for the annual Santa Claus Parade hosted by the Kinsmen & Kinette Club of Pickering.

Route is along Glenanna Road, from Dixie Road to Pickering Parkway.

Parade route from Bayly Street and Mackenzie Avenue, east along Bayly and then north on Harwood Avenue South to Ajax Town Hall.

Rise and shine to see Santa Claus in Whitby, along with marching bands, dance groups, clowns, live music, and floats. More than 20,000 spectators come out to watch the parade each year. This year’s theme is Ugly Christmas Sweaters.

Route is along Brock Street, from Manning Road south to Trent Street.

This year’s theme for the parade is A Homemade Christmas. The evening parade, hosted by the Scugog Chamber of Commerce and the Port Perry Lions Club, features illuminated floats, school groups, and costumed characters.

Parade route is from Port Perry Fairgrounds (15835 Old Simcoe Rd.) and east on Reach Street, then south on Simcoe Street and east on Queen Street to Palmer Park.

The sixth annual Santa Parade in Courtice, in Clarington is a volunteer-run 1.2-km parade with floats, marching bands, and Santa. This year’s parade theme is Holly Jolly Christmas. Bring non-perishable food for donation, and letters for Santa.

Route is along Nash Road from Townline Road to George Reynolds Drive.

This annual parade features more than 50 entrants, including floats, marching bands, and kid-friendly Christmas characters, including Santa! This year’s theme is “Things we do at Christmas Time”. Bring toys to contribute to the annual toy drive.

Route is west on Lakeshore Road from Reynolds Street, then north on Kerr Street and west on Stewart Street.

This Christmas parade has been a Milton tradition since 1933—and as early as 1925, Santa rode along Main Street on the radiator of a car. This year, look for floats that complement the parade theme “Celebrating the North.” And don’t forget those letters to Santa!

Route along Main Street, from Scott Boulevard east to the Milton GO Station.

Santa Claus is coming to Burlington, riding into town on his sleigh, along with floats, mascots, and bands. Bring non-perishable food items for donation and your letters to Santa for delivery.

Route is along Guelph Line from Prospect Street near Burlington Mall then west on New Street, north on Brant Street to Caroline Street.

This evening parade draws more than 150,000 spectators each year, making it the largest single-day event in the Peel Region. Bring your letters to Santa for Brampton Guardian letter carriers to pick up before Santa makes his appearance.

Come to downtown Bolton to see more than 50 floats, bands, and groups in Bolton’s annual Christmas parade, organized by the Bolton Kinsmen. This year’s parade theme is “Favourite Christmas Stories”. The main attraction is Santa’s float, elaborately decorated with a miniature village, reindeer, and sleigh.

Route along Highway 50, from Queensgate Boulevarde north to Centennial Drive.

Now in its third year, the Mississauga Santa Claus Parade will be over 1 km and will welcome 15 custom floats, marching bands, costumed characters, jugglers, and themed groups. Kids should bring their letters to Santa for on-site Mississauga News carriers to deliver.

Route is along Motorway Boulevard from Glen Erin Drive south to Woodchester Drive.

The Streetsville Santa Claus Parade is back! While awaiting Santa’s arrival, parade-goers can enjoy music from several marching bands, along with mascots, dancers, and floats.

Route is along Queen Street from Ontario Street south to Church Street.

One of the season’s first Santa parades in the GTA is taking place in East Gwillimbury, with floats, music, and a free family skate and visit with Santa after the parade. Bring your letters to Santa and non-perishable food items to donate.

Route is along Mount Albert Road from the civic centre to the East Gwillimbury Sports Complex (1914B Mt. Albert Rd.).

Vaughan gets into the holiday spirit with its annual SantaFest and Santa Claus Parade one month from Christmas Day. Entertainment starts an hour before the parade begins. Live music, kids’ crafts, and a parade with colourful floats, marching bands, and colour guards. Arcadia Academy of Music and Toys “R” Us will have pre-parade fun for kids at the corner of Melville Avenue.

More than 50 floats, dance groups, costumed walking groups, and bands are all part of the annual Christmas parade in Newmarket. Bring your letter to Santa for delivery to the North Pole and non-perishable food for donation to the Newmarket Food Pantry.

Route is from Eagle Street at Lorne Avenue, east to Main Street and north to Ontario Street.

Route is along the Queensway from Biscayne Boulevard to Metro Road, then north on Simcoe Street to Church Street and east to the Queensway.

This nighttime Santa parade has been an annual tradition in Richmond Hill since 1974. This year’s theme is “Toyland”. At the parade, expect themed floats, school bands, and Santa on his sleigh. Don’t forget to bring your letter to Santa—Canada Post employees will be collecting them during the parade for delivery to the North Pole.

Route is from Highway 7 and Markham Road along Main Street Markham to Bur Oak Avenue.

Santa Under the Stars Parade

In Aurora, the annual nighttime Christmas parade is one of Ontario’s largest. The festive procession of decorated and illuminated floats, marching bands, and special guests attracts more than 40,000 spectators annually. Bring your letters to Santa, along with non-perishable food for donation.

Route is along Yonge Street, from Orchard Heights Boulevard to Murray Drive.

This year marks the second annual evening Santa Claus Parade in Stouffville! Planned for the parade this year are floats, entertainers, music, and plenty of twinkling lights. Head to Memorial Park right after the parade for a Merry and Bright celebration that includes live music, warm treats, and a fireworks display.

Route is eastbound along Main Street, from just west of Ninth Line to Park Drive South.

The village of Schomberg in King Township hosts a Christmas festival like no other in the GTA, with not one, but two parades! Afternoon and evening festivities include a craft show and food vendors serving seasonal goodies and, at 4 pm, the Santa Claus Parade, with creative floats, costumed groups, and music. The Spectacular Farmers’ Parade of Lights begins at 8 pm, with farm machinery decorated with Christmas lights and Santa aboard a giant combine harvester.

Route is from the Schomberg Comm & Agri Arena (251 Western Ave.) to Main Street and south to Church Street.

Is it okay to lie to kids about Santa? Or to use him to keep kids from being naughty? And is it fair that Santa… 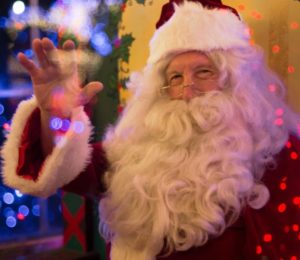 Most years, you can drop in at nearly any shopping mall or holiday event leading up to December 25 for a photo…